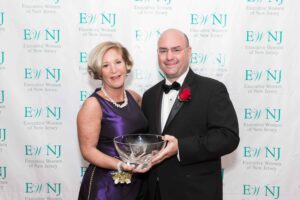 Executive Women of New Jersey Unveils Its 2018 Policy Makers, a List of New Jersey’s Most Influential Women Leaders in Business, Government, and Academia

On May 9, 2018 at 6:00 P.M. at The Palace at Somerset Park, Executive Women of New Jersey (EWNJ) will honor Mary Clare Garber from Princeton Legal Search Group, LLC, alongside 31 of New Jersey’s most influential and accomplished women leaders including special guest honoree Tammy Snyder Murphy, the First Lady of the State of New Jersey, at the organization’s signature biennial gala, Salute to the Policy Makers. Mary Clare Garber is being recognized for her trailblazing professional achievements and her efforts towards advancing women’s leadership.

“We are excited to honor these prominent women leaders, not only because of their individual achievements, but because of what their presence represents. It is undeniable that there is an abundance of talented and highly capable women leaders, yet women continue to be severely underrepresented on boards and in the senior leadership of public companies,” stated Michellene Davis, Esq., President of EWNJ and EVP and Chief Corporate Affairs Officer of RWJBarnabas Health. “That’s why we highlight these trailblazers to showcase the impact of women’s leadership and to continue to spotlight the issue of corporate gender diversity.”

“As an organization that advocates for women in positions of senior corporate governance, it is important that we recognize not only the women who ascend to these positions but the companies that create an environment that makes that ascension possible. As we know from EWNJ’s 2017 report on the number of women serving on boards and in top management of publicly traded companies in New Jersey, firms with more women on their boards not only have stronger financial performance but also fewer governance-related issues such as bribery, corruption, shareholder battles, and fraud. Salute to the Policy Makers presents us with an important opportunity to highlight the companies that recognize the value that women deliver and to amplify our message,” stated Barbara E. Kauffman, President Elect of Executive Women of New Jersey, Chair of Salute to the Policy Makers, and EVP and Chief Operating Officer of Newark Regional Business Partnership.

Through Salute to the Policy Makers, EWNJ raises funds for leadership programs, most notably its Graduate Merit Award Program, which is focused on establishing a pipeline of future women leaders. As the largest provider of scholarships to women who are non-traditional graduate students in New Jersey, EWNJ is proud to have awarded over $1.2 million to deserving candidates over the last 30+ years.