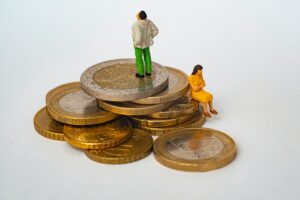 The world of Big Law is a competitive one, and that competition sometimes results in firms trying to “one-up” each other on associate pay.  This summer is another example of that periodic phenomenon.  Recently we have seen firm after firm announce pay increases and deploy remote-work options to lock in associates and keep them away from competitors.  So, what does that mean for in-house recruitment?

We will discuss how these tactics have historically played out, what they might mean for the future of the legal industry, and how the changes could impact in-house recruiting as we advance.

While many industries have felt hefty revenue slashes as a result of the global pandemic, Big Law firms have seen growth, even record-setting growth in some areas of practice.  That growth in 2020 is now beginning to translate into a salary war in 2021.  To discourage lateral moves, and capture the best incoming talent, top firms are in a race to maintain both high profits and associate numbers.

As you likely know, Milbank LLP increased its starting salaries for first-year associates in early June 2021 to $200,000.  Shortly after, Davis Polk & Wardwell LLP upped the ante by raising new associate salaries to $202,500 and $365,000 for those who had been at the firm at least eight years. Over the following weeks, law firms across the nation began to match those market pay rates to attract the best and brightest and keep those top entry-level lawyers from heading to competing firms.

Additionally, with remote work having been the “new normal” for over a year, this new salary war has cast a wider net. Smaller firms outside of large cities have also seen pay hikes as a means to retain lawyers who may no longer be hindered by location. The question of whether Big Law firms will maintain remote work opportunities remains to be seen, though some have sweetened the pot for their lawyers by offering continued work-from-home options in addition to the salary increases.

But . . . Is History Repeating Itself?

Salary wars have frequently popped up in the legal industry since 1999, when associate lawyer salaries crossed the $100,000 threshold.  A notable year when the legal industry saw another major salary bump was 2007.   A year before the Great Recession, law firms saw revenue increases in the double digits, similar to the recent 2020 revenue jumps.

As the economy continued to boom in 2007, firms began increasing associate pay. Simpson Thacher & Bartlett LLP was the first to announce a bump, jumping from a $145,000 associate base salary to $165,000.  In no time, there were reports of other firms following suit.

Business was performing exceptionally well, then, suddenly, it wasn’t.  As law firms began to see financial segments, like M&A, quickly decline, they realized perhaps they were less prepared for the predicted economic decline than they had previously thought.  After the recession, Big Law salaries would not broadly increase again for nearly a decade.

Is history a good sign of what’s to come in this case?  Firms benefited from exponential growth in 2007, then the crash came.  There is some talk that our “post-pandemic” economy already shows some weakness, yet it may still be too early to tell if what happened in 2007 could happen again.

How Did GCs Respond to the Salary Wars of 2007?

With all of the salary increases in 2007, GCs were hard-pressed to recruit and retain legal talent.  Many were concerned that the Big Law pay hikes were passed on to them through increased associate billable rates.  To combat this, many legal departments limited how much outside law firms could use entry-level associates on their accounts.  In 2007, some GCs even moved work to smaller firms to avoid hefty fees. Ironically, in part, law firm salary wars drove GCs to build larger legal teams by bringing or keeping the work in-house.

This time around, the tune has not changed. GC’s are still generally unhappy about the pay increases. Coming out of a global pandemic and experiencing a turbulent economy, some find that salary increases (and the considerable publicity around them) are not only “tone-deaf and unseemly,” but have a genuine impact on a company’s bottom line.  Therefore, it is not surprising if some GCs take a page from the 2007 playbook and begin recruiting in-house lawyers, moving legal work to smaller firms, or hire outside counsel only on a case-by-case basis.

What Do the Pay Hikes Mean for GCs Looking to Recruit In-House Talent?

The current salary war presents a conundrum for GCs.  Higher salaries will likely have a short-term effect of keeping top talent within the law firm walls.  Normally, money serves as a short-term motivator in connection with employment decisions.  It is more challenging than usual for GCs to recruit lawyers for in-house opportunities when competing with Big Law salaries. And as such, it limits the pool of legal talent in large part to other in-house legal departments.

Law firms will want to see some return on their investment in salary hikes.  Thus, there is an unspoken message that pressure will increase on lawyers to perform, and deliver even more grueling hours, to justify the healthy raise the salary war just yielded.  That means that the atmosphere at top law firms will be more demanding for many lawyers over time. Quality of professional and personal life will suffer; autonomy of how and when work is completed, camaraderie, and personal/professional development will diminish.

The increased pressure and limitations in law-firm environments could be just the issue that GCs can leverage to demonstrate why an in-house position is still a better option, despite the recent pay hike.  Four phenomena the pandemic highlighted were:

a.)    the importance of experiencing life outside of work

b.)    autonomy of schedule

c.)    a need for professional community and belonging

To read more on this topic: Is Top Compensation Enough

As the pressure at Big Law continues to build; lawyers will likely be more apt to make lateral moves in an attempt to broaden their career paths, build deeper and broader bodies of work and garner more rewarding professional development through autonomy, belonging, and competence development.

Lastly, the appeal of remote-work options may persuade some to jump ship at Big Law firms. While some law firms have maintained work-from-home options to lessen associate attrition, many firms are now starting to require associates to come back to the office.  If Big Law firms stop offering work-from-home options, lawyers living out-of-market may have an additional incentive to turn in-house.

If you are a GC trying to understand the impact of the current salary war at Big Law firms, know that disruptions in the talent pool due to increased salaries will likely settle down. To secure top talent and have a competitive advantage, you will need succession plans and career paths that provide opportunities to learn new practice areas, sharpen existing legal skills to maintain competitive advantages, build new competencies, and learn business acumen. Inclusive team building and work flexibility may be additional assets that retain in-house counsel.